A picture is worth a thousand words. So what is a video worth?
Maybe a book?
Presenting the first of a series of trailers, detailing the epicness of my weekends and the variety of games played during that time. I give you...Humans Versus Zombies: HvZ trailer!!!! 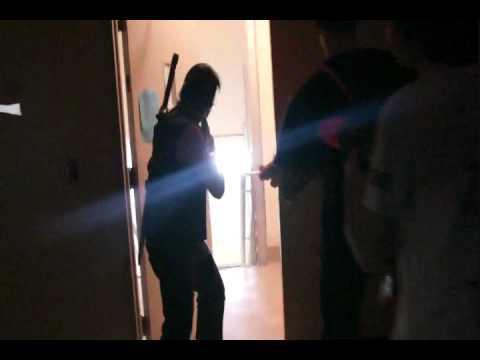 Posted by Radar Midway at 1:23 PM No comments:

"Don't even THINK about it, llama-face!"
Interestingly enough, these words of mine yesterday were actually directed at our alpaca, Maggie, who was moving her jaw in a manner that suggested a sudden emission of expectorate in the near future. The actual llama, Callie, was placidly standing by with a slight smirk on her face. I glared at her. "And yes, llama-face was an insult," I added.
Maggie twisted her head, but I already had my hand up, blocking her muzzle from turning all the way around to point at my face. I could see her contemplating her options, deciding that I already had the drop on her, and acted like she hadn't really wanted to spit at me anyway. She bent down for some hay instead. Callie made a small "Hrrmmm" noise. I wasn't sure if she was laughing at me or Maggie. I stuck my tongue out at both of them and stomped off to get hay for the horses.
Yepp. You guessed it. Mom decided she wanted a llama. But she wanted the llama to have company, and she thought the alpaca was cute, so now we have two full-grown, hair-trigger, spit machines walking around our pasture and hosing us every time we go out there. Mom's argument for keeping them? "But they're cute!"
Ironically, she was also the first to receive an alpaca-style shower. Her enthusiasm is undiminished.
Actually, Mom did have one excellent argument for llama ownership (or at least, it won Dad over): llamas can apparently produce excellent, um, fertilizer for the gardens, if you get my drift. Dad wondered if they would produce more than our needs, to which Mom responded, "Then we can sell it! Maybe make a little business out of it...I know what we can call it! Squirrel's Llama Lumps!"
My sister Squirrel was absolutely mortified, especially when it was suggested that we hand out little bags of "free samples" at my sister Quill's graduation party. "I don't want my name connected with this!" she wailed. I, personally, think Mom might have been kidding...but I wasn't. Free sample, anyone?
Other than fertilizer, I really have no use for a llama. At least you can ride horses; I don't think I could ride a llama, not without getting a face-full of extract of llama. We couldn't even name our llama and alpaca; they came with pre-chosen names, and Mom didn't want to change them because she "didn't want to confuse them."
"You realize, of course, that they don't respond to their current names anyway?" I pointed out, privately hoping to name one of them "Kuzco." I was unaware, at the time, that my hopes would be dashed anyway due to the inconvenient fact that neither of the animals were boys. After I learned their names, I got them mixed up and called the alpaca "Callie" and the llama "Maggie" for a week. Sure enough, they didn't notice.
All I can say now is...if either of those animals hits me with a spitball, I'm firing back. With a supersoaker. BRING IT!!! I DARE YOU!!!!!!
Posted by Radar Midway at 4:25 PM No comments: