"Ahh, it's good to be back...WHOA!!! CAPTAIN DOWN!!!"
These words were uttered by myself as I wiped out while climbing up the slide of the park we were visiting. "We" consisted of myself and my siblings, Quill, Nemesis and Squirrel; and once again, we were joined by the sisters Princess and Chipmunk, who were visiting us for the week. It was by popular, nay unanimous, vote that we decided to reenact some of our favorite games from last summer. After multiple games of tag at multiple parks, we arrived back at the "Blue Park" to play "Lava Boat" until we "got sick of it" and devolved into "shoving" each other off the "playground."
Allowing sanity to take a brief leave of absence was--and is--a key ingredient in all our games.
"I'm the captain," I announced.
"Princess is the cook!" Quill announced, probably due to the fact that Princess had just made a very professional batch of cupcakes back home. "I'll be the doctor!"
"Hey, Quill is supposed to be the first mate," I protested, then relented. "Fine. Nemesis can be my first mate."
"Can I be helmsman too?" Nemesis inquired, pulling out his Swiss Army Knife to make adjustments to the steering mechanism. 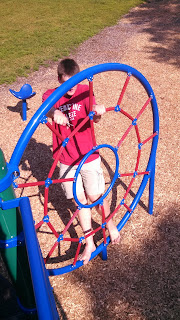 "On my boat, the first mate is the helmsman," I informed him. Appeased, Nemesis went on with his adjustments.
"I'm the official squidmaster, and Chipmunk is my helper!" Squirrel snickered.
"Let's go ride a squid!" Chipmunk proposed. Both girls bolted off the boat in search of a squid.
"I'm just gonna ignore them," I muttered.
"Hey, Radar, what was this called again?" Princess asked.
I checked where she was pointing. "Oh, that's engineering. Check the fuel levels and prepare for startup--Nemesis? Thrusters." 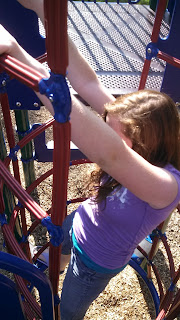 Princess agreeably clambered down to the engineering level to report that it was all good as Nemesis abandoned his post in favor of debating the potential for a horrible disease with Quill. It was eventually concluded that everyone was in danger of immediate death unless we could procure an antidote immediately. Quill dashed off to see about the ingredients while Princess and I kept the boat running and Nemesis watched for trouble. For some reason, he failed to see the Terrible Two off to starboard, and was thus surprised by their cries of "Giddyup, squidie!!!"
"What are you doing?" I demanded to know.
"We're riding a lava squid!" Squirrel announced with glee, bouncing up and down.
Quill took the opportunity (and possibly revenge) to announce that we had all the ingredients except one, which was "Extract of Lava Squid." I jumped on the bandwagon by announcing that the plague was so severe that we needed the ingredients right now. Nemesis left the boat to try to talk the girls into removing themselves from the squid. 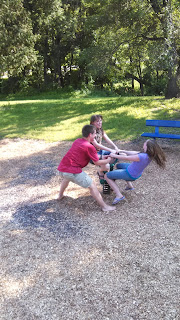 Needless to say, he was unsuccessful.
Upon his return to the boat, he offered to help me collect the "Extract of Lava Squid" by holding onto my ankles as I went head-first down the slide to collect it. My mission was successful, only running into a small snag when he tried to pull me back up. First, his hands slipped, almost hurling me face-first into the lava; second, when I was almost back up, Squirrel and Chipmunk returned, loudly announcing that they would "pick out the best and fittest lava squid" for us, to which Nemesis departed to debate lava squid fitness and left me hanging by my toes halfway down the slide.
"You're a dead man, Nemesis," I informed him when I finally pulled myself back up, proceeding to chase him across the boat.
"I have the cure!" Quill announced, beaming proudly from the upper deck. Everyone ignored her; even Princess, who was laughing too hard to hear her anyway. 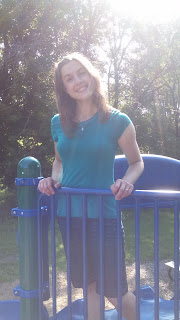 When everyone had settled down, we began effecting repairs to our grossly maltreated lava boat. Nemesis and Quill went to the helm; Princess and I worked on the engineering cage; Squirrel and Chipmunk wandered off. I can't speak for anyone else, but the conversation at my end went something like this:
I climbed into the engineering cage. "Hmm, a screw is out. I need the driver."
Princess handed me a stick. I frowned and returned it. "No, the Philips-head screwdriver."
"Oh, right." Princess quickly handed me another stick.
"Thanks." I "tightened the screw" and handed the "tool" back. "We need to weld this section. Welder?"
Princess searched through the pile, handing me another stick. I eyed it. "That's not the--"
"Yes it is," Princess explained. "See?" She gestured at a feathery piece of bark hanging off the end. "There's the flame."
"Ahh, it's an oxy-fuel welder," I nodded, to cover my blunder. "I thought you were going to hand me the arc welder. This will work."
"Hey, I think it's about time to go home and eat," Quill announced.
I itched my nose with the "welder." "Real or imaginary?"
"Real," Quill clarified.
"Alrighty, let's go," I agreed.
"After we swing," Quill finished.
"Okay. Nemesis and I will be on the lifeboat," I informed her.
"It's a LAVA SQUID!!" Squirrel yelled. I ignored her.
Nemesis and I had a fine time on the tiny teeter-totter, culminating in a shoving  war to try to knock each other off...then, on the way back to the car, Princess and I had another camera war. 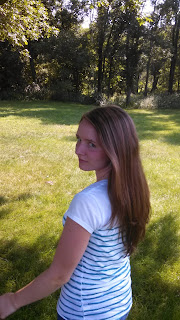 Posted by Radar Midway at 5:41 PM No comments: