I sneezed violently, making a mental note (the fifth of such) to dust my next bedroom occasionally. While no one ever entered my bedroom typically--it being a haven for all the clothes I couldn't be bothered to throw into the hamper, as well as housing my impressive collection of Nerf paraphernalia--and the dust normally didn't bother me, it got to be a bit of a pain when I began packing.
It was common, of course, for me to get distracted during my attempts at packing. Inevitable, actually, given my squirrel-like tendencies towards getting sidetracked. However, it was one thing to get absorbed by the random pieces of garbage I was discovering...and it was entirely another to take a completely unexpected side trip.
Maybe I should back up. The reason I was packing (actually, still am--like I said, I get distracted) was because I had finally graduated with my Master's degree in Mechanical Engineering (and yet I still write...why?) and I was in the process of finalizing which company I wanted to work for. Since the end was definitely in sight, as far as current living quarters went, I decided to consolidate my junk, pack it up, and pitch as much of it as I could to making moving easier.
It was definitely a work in progress.
I cleared off my endtable fairly quickly, following that up with the junk collecting in the drawers themselves. Most of that went into the trash. I straightened up and, without looking, reached over to my dresser to sweep everything off the top and into the trash bin.
My right hand settled on a cylindrical object...and automatically closed around it. I picked it up involuntarily, my left hand settling into the familiar-yet-long-forgotten grip below my right hand...
...and I found myself back on Kashyyyk, staring out through the dense forest. Ten years previously.

A sudden crackling sent me spinning around, back towards the downed spaceship. It was just my brother, who was descending the ladder. "Any sign of them?" he called.
I turned back towards the creek. "Not yet. But they should be following up on us pretty shortly. How's the ship?"
"Pretty bad," Nemesis informed me grimly. "We should be able to get it fixed, but we need time. Oh, and a new hyperdrive."
"Maybe we can pick one up from the Neimoidians," I suggested. "Y'know, since they were the ones who shot us down in the first place. Got your electrobinoculars?"
Nemesis brightened, pressing the 'nocs to his eyes. "Seems fair. Hey, there's a base on the hill, other side of this valley. And--droids coming!"
"Where?" I snapped, dropping into a defensive crouch.
Nemesis gestured, crouching next to me. "Just across the creek. They'll see us--"
"They saw us," I cut him off, listening to the distant shout of discovery.
Nemesis grinned. "Let's take them out before they can call their base!"
I grinned back. "I'm on the comm guy."
We exploded out of the undergrowth. I located their communications droid and thrust my hand out, force-punching him straight off his tank. The other droids snapped their blasters up, tracking us...
Almost in unison, my brother and I punched the our respective buttons. With a snap-hiss, our lightsabers sprang to life.
The first two ranks of droids opened fire--and promptly died as Nemesis and I batted their bolts right back at them. We jumped the creek together, slashing and stabbing at the metal ranks closing to meet us. Nemesis and I got separated; I was okay with that, though. If we were separated, there was no confusion as to who killed what.
I force-pushed another droid straight into his commander's tank, sending him, sparking, to the ground. I ducked and rolled under the tank, slashing through its repulsor unit and diving out the back. The tank crashed to the ground and exploded, decimating the rest of the squad I was taking on. The last few droids made the mistake of firing, so I deflected their shots right back at them again.
Nemesis had apparently just finished as well. I closed down my lightsaber. "I got my tank first."
"Yeah, well, I jumped inside my tank, killed the droids, and then slashed my way out the back," Nemesis retorted, a bit  competitively.
I shrugged. "Let's recon the base. Quietly--silenced blasters only." I drew the blaster strapped to my thigh.
Nemesis followed me up the hill. "I take it we don't want to let them know there are Jedi on the planet?"
"Yepp," I nodded.
"What about the squads we just took out?" Nemesis persisted.
I shrugged. "By the time they find those guys, we'll be off-planet."
Quickly and efficiently, we sniped the lookouts off their perches. I sneaked over to the door and put two shots into the lock, blasting it open. We shot inside and slammed straight into--
"Oh, hi, boys," Mom greeted us. "I was just about to call you; it's time for lunch. Radar, change your shirt--were you rolling in mud?"
"I had to take out a tank," I informed her indignantly.
Mom couldn't help smiling. "Well, put your laser sword--"
"Lightsaber," Nemesis and I chorused.
"--lightsaber away and get yourselves into the kitchen," Mom laughed.
"Duel you!" I yelled and flicked my lightsaber back on, charging Nemesis and backing him towards the stairs.
Mom sighed. "Don't hit the pictures!" she called after us.

I tossed my lightsaber from hand to hand before flipping the blade out. The batteries were long since dead, of course, and the hilt was scarred from long use. It looked like something that should have been thrown out long ago with my childhood, as I grew up and moved on.
However, I had apparently only been faking it.
I couldn't help grinning as I pretended to turn the lightsaber on, vowing to hunt down some batteries. I might physically be twenty-two and a productive member of society, but--and I spun, batting some imaginary blaster shots away--I would never, could never, give up my imagination or my admittedly childish love of pretend games.
Still grinning, I closed down the lightsaber and carefully packed it before continuing my hunt for actual junk to throw away. After all...a Jedi should never throw away his signature weapon. After all...
...it's an elegant weapon, for a more civilized age. 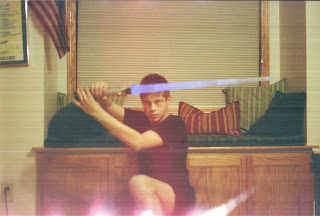 Posted by Radar Midway at 5:49 PM No comments:

Captain's Log, Day 142: URCARU, or How to Kill a Romance Novel

Nemesis is also a writer, like me. Unlike me, it's closer to being his life--he's going for an English major (which is a waste of a good math brain, but he punches me every time I point that out). The following story was written by him for a contest, which he won, surprising no one but himself. I decided to publish it on here, too, because it's hysterical.


URCARU
Or, How to Kill a Romance Novel


*Notes: This account was for advertisement purposes only: Mainframe is aware of multiple scenarios with varying complexities – heck, he’s not even done compiling all possible relationship factors. URCARU services are not yet worldwide. Your support would be greatly appreciated.

Published in Loomings 2015
Posted by Radar Midway at 2:33 PM No comments: