"Nemesis!!! Get yer kiester up here!!! We're under attack!!!"
"I'm not finished with the proton analysis yet!" my brother complained from inside the command center.
I readjusted my grip on the deck gun. "We won't be able to finish anything if we don't get another gun online here! We have three more fighters incoming and no time to dive!"
Nemesis scrambled up through the top of the conning tower and joined me on deck. "I told you we should have dove after we launched that first attack."
I sighted down my gun at the incoming fighters. "Yeah, but then we wouldn't have been able to collect your samples or take down the other ship. OPEN FIRE!!!!!"
Machine-gun fire shattered the early afternoon stillness. Two fighters bought the farm, and Nemesis and I threw ourselves flat in an attempt to avoid the strafing of the last two. The fighters shot by over head before banking away for another run.
I looked over at Nemesis. "Do we have any surface-to-air missiles left?"
"A couple." Nemesis squinted into the sky. "We'd have to work fast, though."
"Right." I made a snap decision. "Get back to the helm and prep for diving. I'll lock on to the fighters and launch the missiles."
I half-fell, half-jumped through the trapdoor that led into the conning tower, Nemesis hard on my heels. A few seconds of busy switch-flipping and Nemesis, at the helm, reported, "Ready to dive, Captain!"
"Good. Prepare to--CLOSE THE HATCH OR WE'RE GONNA DIE!!!"
"Whoops! Sorry!" Nemesis battened down the hatch and saluted. "Now we're ready to dive, sir!"
"Firing missiles!" I flipped the switch and pushed the firing button twice. "Dive!"
"Captain, one of the fighters is down. The other one deployed countermeasures and is preparing to depth-charge us!" helm reported.
"Hard to port and brace for impact!" I ordered.
Two thunderous blasts shook the command center. Nemesis checked his readings.
"Science station reporting no damage to the samples. The fighters were definitely alien though, Captain."
I raised my eyebrows at this change of plot. Nemesis looked back at me innocently. "Should I surface and prepare the ship for space mode?"
"Yeah, why not?" I agreed, turning back to the weapons and tactical board. "The last fighter is burning  for space; I've locked a transmitter to his hull."
"WHY ARE MY SAMPLES NOT REACTING???" Nemesis exploded. I ignored him. 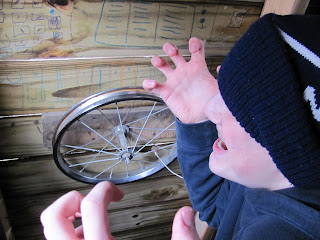 "Our radar's tracking the fighter--it just went to warp!" I shouted. "Go after it!!!"
Nemesis quickly pushed the necessary buttons and spun the wheel. "Hard on his trail, sir!"
I studied the nav board. "Breakout in three minutes. Shall we effect repairs?"
Nemesis was busy at his science station. "You do that. I'm working with my samples. Throw me the screwdriver, would you? I need to build a new panel."
I ignored his disrespect towards a senior officer and chucked a crayon at him. He snatched it out of midair and began drawing his new panel. I studied the life support systems and decided that I wanted an atmospheric containment shield on the top deck...in case the machine guns needed to be manned in the dead of space. I grabbed the drill and some wire and hooked up the batteries to a switch and a voltmeter. 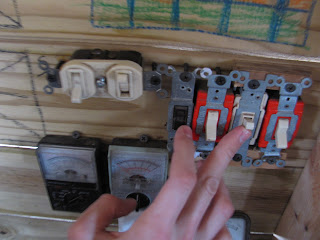 "Dropping out of warp," Nemesis reported. "Oh, and the samples were part of the exhaust from the fighter. The elements are from their home planet."
"We need to get down there and check it out," I mused, strapping on my blaster.
"Fighters, incoming!" Nemesis warned.
"On it." I dropped back into my chair and activated the weapons systems. Once my screen lit up with targets, I settled back with my fingers on the triggers for the mobile gun platform. Nemesis spun the wheel, banking us into a slight turn preparatory to atmospheric entry.
"Remember, too steep and we burn up," I reminded him.
"Right, and too shallow we bounce off. I remember," Nemesis rolled his eyes impatiently. "You shoot, I'll fly." 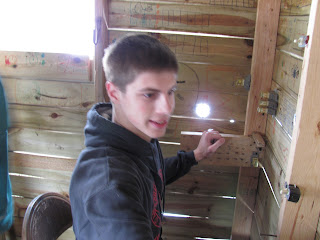 "Copy that, Lieutenant," I nodded and squeezed the trigger. The plasma bolts tore into the oncoming fighter wave, decimating it. "Oh, crap--Nemesis, put the shields up!!!"
"On it!" Nemesis lunged for the button.
"Too late--we're hit! Activate the cloaking shield!" I yelled, frantically shooting everything in sight.
"Activated! We're invisible now," Nemesis reported.
I surveyed the damage. "I'm gonna have to do a spacewalk to fix this. We lost our rear thruster." 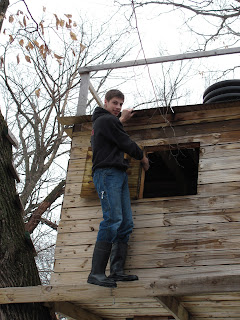 Nemesis began prepping the airlock as I quickly drew some new controls to set up an atmospheric containment shield outside the airlock.
Then I stepped outside.
The thruster was located conveniently right outside the airlock. I held tightly to the airlock anyway, conscious that a small slip could send me hurtling into the depths of space, or conceivably toward the planet we were now orbiting, causing me to land in a creek (assuming we were orbiting above one...and I didn't burn up in reentry...).
I clambered back in the airlock. "It's fixed up! Plot a course for the surface, Helm!"
"Aye-aye, Captain!" Nemesis punched a few buttons and began guiding us down for a gentle landing. The landing gear dropped and we landed in an alien forest. I disengaged the cloaking shield and looked out the viewport at the river of magma flowing by.
"Where should we..." Nemesis's voice trailed off as a dinner bell was heard ringing in the distance.
"Lunch!" I suggested, opening the trapdoor. "We could raid the alien outpost up there, eat lunch, and then come back with some data that will let us convert this ship into a walker so we can explore the forest!"
Nemesis grinned. "I like it!"
I began unrolling the rope ladder. "Don't forget your blaster!"
"Hey, you morons, it's time to eat!" My sister Quill was below us, hanging onto the ladder.
Nemesis and I exchanged a glance. "An alien!!" 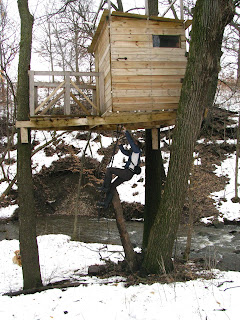