"Grab the end of the lights!"
"I got them...now what?"
"Now you get in the bucket, I lift you up to the roof, and you put them on!"
"Wait...I gotta be in a bucket with him??"
"Ohh, just do it..."
With some slight pushing and shoving, Nemesis and I climbed into the bucket of the tractor. Dad throttled up and raised the bucket towards the roof. I maintained a death grip on Nemesis and the bucket edge. Nemesis gave me a quizzical look. "Why--?"
"If he tips us out and I die, you're coming with me," I told him.
"You really think that's a good idea? If I'm there, I'll tell St Peter the truth, you know," Nemesis pointed out logically.
"Good point." I laughed and let go of my brother.
We lurched to a stop in front of the roof. Nemesis held up the lights and I started strapping them into place. After a couple minutes, Dad re-positioned the tractor so we could continue down the edge of the roof, a move prompted by me almost falling out of the bucket trying to reach the next section.
Fortunately, it didn't take too much longer to hang the lights, which was good because it was COLD out. When we were done, Dad lowered Nemesis and myself down towards the ground. When we were halfway there, he tipped the bucket. Nemesis and I were wise to his ways, however, and opted to bail out. We took off for the house before he could start chasing us with the tractor.
Inside the house was crazy. Girls were running back and forth with lights, greenery, stuffed Santas, and cookies. Nemesis and I helped them put away a few cookies. We made quite a dent in the supply before we were discovered and forcibly ordered out of the kitchen. Pragmatically, we departed to untangle more lights and steal a few strings for our room.
"Hey, guys, we need to set up the Christmas village!" Quill yelled at us a few minutes later.
Nemesis and I returned from our now-glowing room (glowing because of lights, not nuclear waste, although the second guess would have been just as likely) carrying half of the Christmas village in one go because we were competing to see who could carry the most boxes the longest. Mom intercepted Nemesis just before his stack would have collapsed. "I won!" I yelled gleefully.
"No fair!" Nemesis complained. "Mom interfered!"
"You should have avoided the obstacle," I pointed out.
"New rule: you're limited to three or four boxes each," Mom informed us, graciously ignoring the fact that I'd just referred to her as an obstacle. "You need to be able to see coming up the stairs."
"Vision is overrated," I muttered, accidentally knocking my glasses off my face and then stepping on them when I tried to find them. Being used to such occurrences, I bent them back into shape and stuck them back on my face. "I'll set up the table!"
As always, it was my duty to set up the Christmas village, a duty I defended fiercely. The final results usually looked pretty good, so I was never ousted. Everyone helped, but worked under my direction. Squirrel tried a hostile takeover once; the rebellion was promptly quashed when I hurled a box at her.
Then, after dinner, it was time for decorating the Christmas tree. Everyone had their own box of ornaments that they put up, with only the traditional squabbles occurring.
"Radar, that's my bird!"
"Squirrel, you do this every year. This is my bird. Paws off!"
"Quill, tell him it's my bird!"
Quill looked up from where she was meticulously organizing her ornaments by size, unlike the rest of us who were just throwing ours on the tree without thought to order. "Actually, Squirrel, it is his. We do go through this every year."
"Mom!" Squirrel appealed to the higher authorities. The higher authorities held up her hands in the universal signal for "Don't look at me; I'm staying out of this one." Squirrel huffed. "Fine, you can hang it up this year."
"And next year, too," I pointed out, laughing before I faceplanted the tree trying to reach a high branch.
"Mom?" Nemesis peered around the tree. "Radar's hanging all of his ornaments on this side of the tree again."
Mom peered over her glasses at me. "Could you spread them around the tree, please?"
"Nope," I replied cheerfully. "This way, I don't have to hunt for them when we have to take them down!"
Mom sighed, giving up on a lost cause. "He's his father's son," she announced to the world in general, with a pointed look at Dad, who was doing the same thing with their ornaments. Dad thought for a second before moving one of their ornaments to the other side of the tree, commenting, "I don't do that! See?"
Everyone laughed. "I'm done!" I announced.
"You're kidding." Nemesis stared at me in disbelief.
"Does anyone need help?" I asked.
"Sure, I do," Quill told me. "Can you hang this up high?"
"No problem," I told her. "Which side is yours?"
Quill rolled her eyes. "I'm a sane person. I don't have a side. Just put it up high, please." She picked up four or five ornaments and began walking around the tree, looking for good branches.
A few minutes later, we were done. We all paced around it for a few moments, admiring our work.
"You know what we have to do now?" Quill finally asked at length.
"Way ahead of you," I announced proudly, running to the closet to pull out my presents for everyone else. I placed them under the tree proudly. "There, now it's a Christmas Tree!"
"SQUIRREL, DON'T SHAKE THE PRESENTS!!!!!" 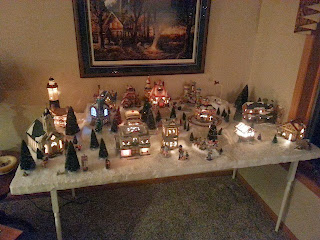